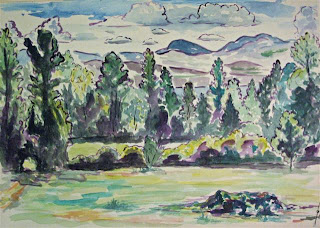 
July 1, 2008. After one year from the first water color that I painted at the orcarhd (exactly one year to the day) I sat in a similar location looking west onto the Adirondacks, the lake and the small clearing just south of the huge Sumac stand. Moriah painting with me. As with Katra who I painted along side earlier in June, I enjoyed the conversation and company while creating.
My hope was to capture the same feeling that I experienced the prior year, which was not a good idea. As in other aspects of life, one can not truly capture the feeling of past moments. The attempt to relive this moment in time distracts from being fully present, which showed in my work. The colors became muddy as I worked to build contrast and unlike my painting a year early, this rendering was tighter and too technical. The paint seemed to plop on the page instead of flowing. Moriah’s painting jumped off the canvas in color and shape, mine sank into the paper like Samuel Taylor Coleridge’s Ancient Mariner’s Albatross.