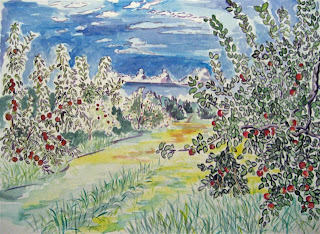 August 13 in the southern part of the orchard looking north between a row of older apples and peaches. The color from both the peach and apple fruit graced the waves of deep green leaves and yellowing grass. It was late morning that bled into early afternoon with a few shadows cast from the sun overhead. Row upon row of small clouds lined up southwest to northeast in addition to a long mass of giant clouds sitting far to the north. It has been a long time since I have seen a cloudless sky.

Sitting closer to the apple tree I could capture the variation of red and green in the tree, unlike the peaches that were at a distance and were flatter in color (though later when walking through the rows of peaches I could admire the rich blending of crimson, orange and yellow). The purple branches of the apple wove back in forth between the waves of leaves that shot out in all directions, reaching for sunlight. The leaves of the peaches are very different than that of the apples, long and slender, lighter in shade. As I painted both apple and peach leaves I was reminded of the difference between the two brush strokes, the apple like quick darting and pointed dots while the peaches felt like flicking minnows across the paper. The smells of the cut grass in addition to the occasional sent from the peaches as the wind changed added another element to the time that I can only hold with memory and these few words.